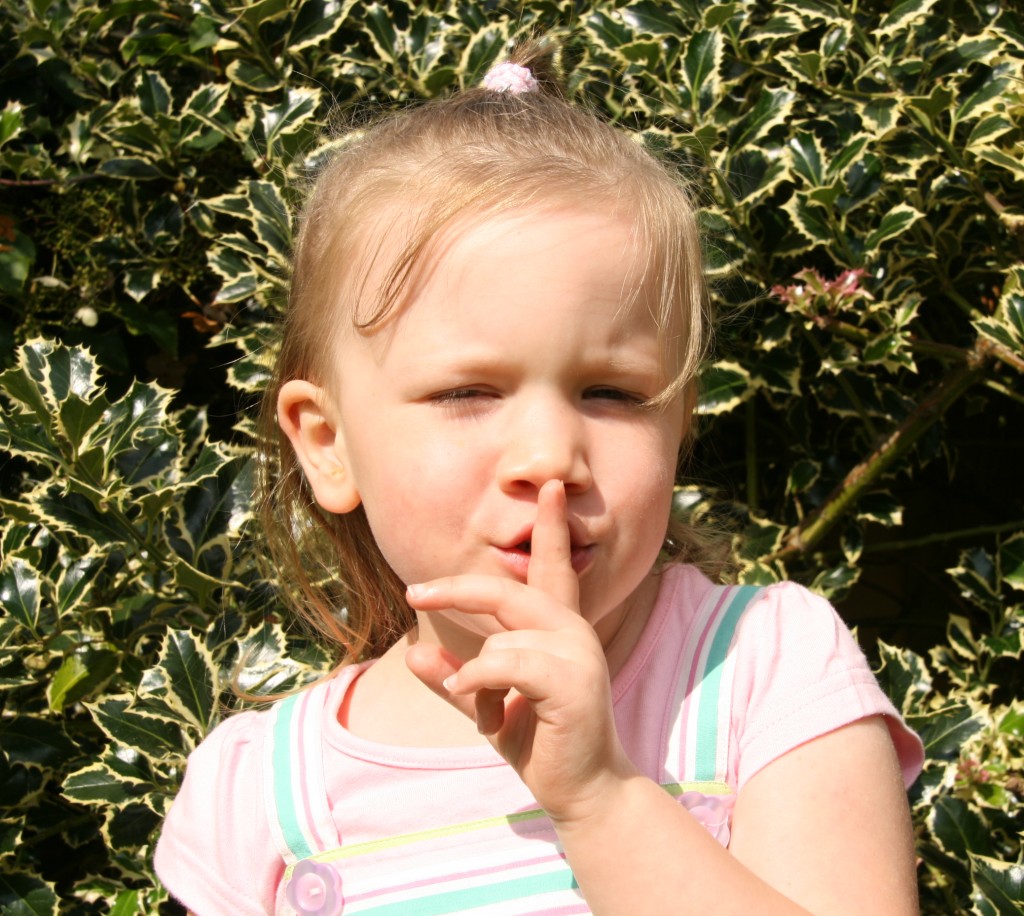 When I explained the idea of stealth schooling, my husband’s eyes lit up.

I looked at him, confused.

“You know,” he said.  “The one where you hide the broccoli inside brownies so your kids will eat it.”

It’s a pretty good analogy, except for one big difference. Those recipes were a pain in the butt to make. They involved so much planning, steaming, pureeing, freezing, and thawing that by the time I finished I had to lie down and take a nap. And pink pancakes made with pureed beets just didn’t go over as well as you might think, at least in my house.  The cookbook’s been gathering dust on a kitchen shelf for a few years now.

Stealth schooling, on the other hand, is easy.  This is important because as homeschool moms go, I am kind of a slacker. (Look for a blog post on that topic soon).

For us, stealth schooling simply means helping our six year-old “Jack” find fun materials while not pointing out that they are educational.  Like a lot of gifted and 2e kids, Jack resists most top down or structured efforts to teach him, and he can turn off to whole subject matter areas pretty quickly if he feels pressured or coerced.  But if he’s having fun and making his own choices, he learns a boatload without even realizing it.

Here are some of our favorite stealth schooling techniques:

The classic unschooler’s move involves leaving educational stuff lying around where kids will stumble upon it and get interested on their own.  When I remember to do it, I’ll plop reading material by Jack’s place at the table so he’ll see it at breakfast.  Most of the time he’ll start reading without my having to say a word.

I don’t know about your kids, but if mine is watching something on a screen, any resistance he might have to learning melts away.  He loves Mythbusters, Bill Nye the Science Guy, Liberty’s Kids, Schoolhouse Rock—and because it’s screen time, he feels like he’s getting away with something.

Ever since Jack taught himself to read at three using Starfall.com, I’ve had to concede that online and game-based learning was a natural fit for him. Since then, he’s learned geography from Stack the States, Stack the Countries, and Sheppard Software; the US presidents from Presidents and Aliens; algebra concepts from DragonBox; fractions from Motion Math; and a whole host of things from BrainPop. I’m not crazy about the addictive tendency of the medium, so we do limit screen time. But it’s incredible how much he’s learned this way, and he’s loved every minute of it.

When we go to the library, Jack gets free reign.  Some months he wants all graphic novels or Junie B. Jones, other times we leave with stacks of biographies or history books.  Even when I have opinions, I don’t intervene (although I admit, I’m pretty glad he hasn’t ever requested Captain Underpants).  So far, our hands-off policy has really paid off.  He loves to read, and—who knew?—he’s learned a slew of great words from Calvin and Hobbes.

My own personal ninth circle of hell?  Trying to get Jack to write a thank you note.  I cajole, he rebels. I yell, he cries.  Paper gets ripped and feelings get hurt. It’s a disaster.  Writing “assignments” aren’t much better.  Now I look for stealthy writing opportunities as they arise: grocery lists, birthday wish lists, funny signs that get pasted on the walls.  We even co-wrote a chapter book a few months ago—he dictated and I typed it up—because he got excited about the story.

6. Experiential learning of all kinds.

Museum visits, travel, fun classes—all of it counts.  I just resist the urge to say: “Isn’t this great? It’s so educational!”

Nothing in the above list is revolutionary.  It’s all pretty standard stuff for most homeschoolers.  What makes it “stealth schooling,” in my book, is simply the low-key approach.

That’s harder than you might think, at least for me.  I was a teacher for many years.  I’ve always LOVED school, and school-y projects, and even homework.  I’d like nothing more than to clap my hands and say, “OK, Jack, HERE’S what we’re going to learn today!” except that he would probably throw a fit, or go running out the door.

Gifted and 2e kids can be as easily spooked.  Stealth schooling is like wearing your moccasins. Tread lightly, and they might not even notice you’re there.

This post was part of a blog hop sponsored by Gifted Homeschoolers Forum.  For a variety of perspectives on stealth schooling, click here or scroll down for all the links. 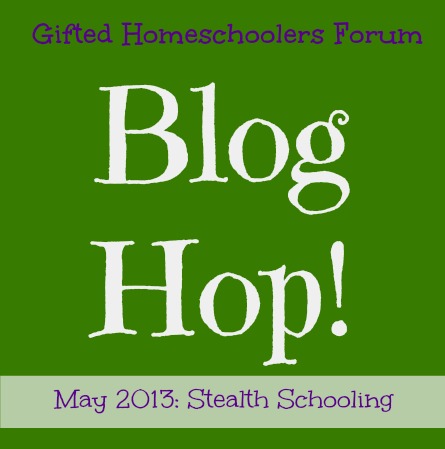 You Can Lead a Horse to Water, But You Might Have to Trick Him into Drinking For His Own Damn Good – Buffalo Mama

Homeschool Tips: Simple Stealth School – How to Work and Homeschool 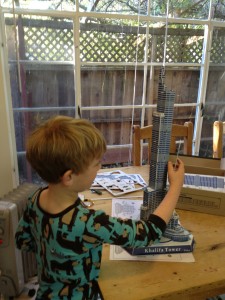 Unschooling in action: building a model of the world’s tallest building while still in pajamas.

a home-school education with the child taking primary responsibility instead of a parent or teacher; also called “child-directed learning” or “self-learning.”    –from Dictionary.com  (The word doesn’t yet appear in Merriam-Webster)

Good things happen to the human spirit when it is left alone. –John Taylor Gatto

Living is learning, and when kids are living fully and energetically and happily they are learning a lot, even if we don’t always know what it is.  –John Holt

Two years ago, I hadn’t even heard of the word “unschooling.”  My son “Jack,” then four, was slogging disconsolately through pre-K, gamely sounding out letters with his classmates though he could already read chapter books on his own.  I was researching local kindergartens in hopes that next year would be better.

We knew finding the right school would be tough.  They’d have to be flexible and understanding, able to accommodate a kid with off-the-charts reading ability and a passion for certain subjects—astronomy, geography—who struggled to keep his hands to himself and melted down when he didn’t know the right answer.

Public school, with its crowds, slashed budgets, and tendency to keep kids in lockstep, was probably out.  But there had to be a school somewhere that would be a good fit for him.  Right?

We’d been told by an expert in giftedness that homeschooling would be Jack’s best bet, but I wasn’t ready.  I wasn’t going to go there unless we had run out of options.

Besides, my husband and I are, as he puts it, “school people.”  We first met in the teachers’ lounge of a public high school, for God’s sake. (He taught Spanish and social studies and I taught English.) Now he’s a high school principal, and I lead creative writing workshops for adults, but our shared love of schools remains.

We found an alternative private school for Jack that seemed to get it.  When we explained our dilemma to them, they nodded sagely.  “We get lots of kids like him,” they said.  “Don’t worry.”  (Yeah, right.)

It only took a few months of kindergarten to realize it was a disaster.  Jack was anxious, lonely, and angry.  His innate love of learning was fading.  His joyful demeanor had given way to a wan exhaustion.  All he wanted to do was watch the movie Cars over and over—a bad sign for a kid who used to soak up adult-level astronomy DVDs.  In January, we pulled him out without a plan, simply because we couldn’t take it anymore.

And so began our great adventure.  Taking the advice of many in the gifted homeschooling community (thank you, Gifted Homeschoolers Forum), we spent the first few months “de-schooling.”  That meant avoiding any sort of instruction and letting a weary and skeptical kid decompress, play, and relax his way back into learning.

All that letting it be made sense in theory, but it wasn’t natural for me.  A teacher by temperament as well as training, I have a perennial itch to direct things, and as weeks went on with nothing really quantifiable happening, I couldn’t help but feel anxious.

Then one day, we were eating lunch and Jack was waving his fork in the sunlit air beside him.

“What are you doing?” I asked him.

“Trying to cut dust particles in half,” he answered.  “If I cut them,” he went on, “will they break up into cells or atoms?”

Free of the confines of school, his curiosity was coming back, and it kept on coming.  He wanted to know about weather, and the Periodic Table, and his old loves, geography and astronomy.  He invented his own carnival games, acted out long imaginary stories with his toy cars, and listened to the Hallelujah Chorus over and over again.  Between playdates and park days, he taught himself Power Point and Comic Life on the computer.  Most of all, he seemed happy again.

At some point, I told myself, we’d start doing “real” homeschooling. I imagined this would happen mostly at the kitchen table and would involve paper and pencils and me teaching him the “important” stuff.  We’d have a schedule and a plan.

But any time I tried to take charge or push an agenda, it backfired.  Jack would melt down, or instantly develop an aversion to whatever it was I was trying to teach, even if it had originated in an interest of his own.  He needed, for a whole host of reasons, the freedom to learn what he wanted, when he wanted, how he wanted, and for as long as he wanted.

And I needed to get out of his way.

That’s how, in our house, de-schooling became unschooling.  Simply put, it was, and is, what works best for our kid.  It’s thrilling to watch him “go deep”—delving into American presidents or skyscrapers to the exclusion of all else—while also having plenty of time and space to play and be a kid. (It’s trickier when he wants to dive into subjects that we’re less comfortable with, like Minecraft.  But that’s another blog post entirely.)

There are a few caveats here.  Unlike some, we’re kind of old school about things like bedtime and teeth brushing and limits on screen time.  And for all the faults of the public education system, I refuse to bash schools and what for me has been the joy of the classroom.  What’s more, I see a real value, over time, in knowing how to buckle down and learn something that’s not one’s first choice. We’ll have to figure out that one before too long.

But I’ve also come to believe in the wisdom of unschooling, and the way it allows kids to bloom.  For asynchronous kids like mine, it can be nothing short of a miracle.

Children don’t need to be taught how to learn; they are born learners. … And if they are given a safe, supportive environment, they will continue to learn hungrily and naturally—in the manner and at the speed that suits them best. 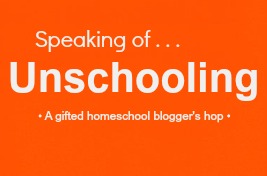 Want to read more about unschooling?